Spider monkeys belong to nobody, and to everybody.  Sanctuaries and rehabilitation facilities are guardians for monkeys who have been negatively impacted by human beings, be it through hunting, the illegal pet trade, deforestation, or the infrastructure of civilization (uninsulated power lines, vehicular accidents, roaming dogs, etc.).
There is not a "right way" to rehabilitate and release spider monkeys, and not all spider monkeys can be successfully rehabilitated or released.  The following individuals and organizations dedicate their time and resources, and spider monkeys benefit.  Your support is welcome.  Some are open to the public, a few offer volunteer opportunities, and visitation can be arranged at the others. 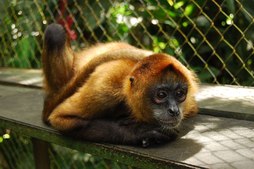 Hercules
Proyecto Asis Animal Rescue Center, Arenal, Costa Rica
http://www.institutoasis.com/index.htm
Named "Asis" for the patron saint of nature, the shelter was founded by a local veterinarian. In coordination with the Monteverde Conservation League and MINAET, the wildlife rescue center provides surgeries, medicine and rehabilitation to wildlife in need. Though many animals heal sufficiently to be released back into their natural habitat, others are not so fortunate. Visitors and volunteers will meet Hercules the spider monkey and other animals that live in enclosures that accurately recreate their native habitats.
Proyecto Asis is open to the public 8:00 AM - 4:00 PM daily; $25 adults, $15 children. 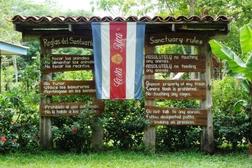 Sanctuario Lapas El Manantial, Puntarenas, Guanacaste, Costa Rica
http://www.santuariolapas.com
Tel (506) 2661-5419
"El Manantial is a project dedicated to the conservation of macaws native to Costa Rica. The main focus of the project is the Scarlet Macaw (Ara macao) and the Great Green Macaw (Ara Ambigua), who once flew freely in many areas of Costa Rica.  At this moment in time there are estimated to be less than 40 breeding pairs of Great Green Macaws in all of Costa Rica. Although the Scarlet Macaw is more numerous, it is now only possible to see them in isolated parts of the country, with the largest population being in Carara National Park."

Two of three spider monkeys living together now.
"Here at The Macaw Sanctuary we are currently working with some of the most endangered species native to Costa Rica.  The animals living at the sanctuary have been taken out of the wild as a result of the demand of trade in the international black-market for pets.  We are  striving to ensure a better future for these animals through the improvement of  their local habitats and the reintroduction of certain species back into the  wild, helping to increase their population size.  As there has never been a protocol written for what we do here, we are continuously carrying out in depth research within the project."
Among the animals lucky enough to find a permanent home at The Macaw Sanctuary are three young spider monkeys, available for public viewing in a large area secured by an electric fence.
The Macaw Sanctuary (Sanctuario Lapas El Manantial) is open to the public daily for a $15 entry fee. 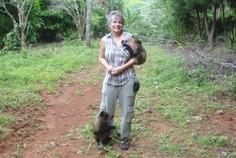 Michele with Chiquito and Lolita.
Spider Monker R & R (Rehabilitation and Release), San Ramon, Costa Rica
http://www.spidermonkeyrehab.com/
http://www.facebook.com/pages/Spider-Monkey-R-R-Rehabilitation-and-Release/329345833763381?ref=hl
Our goal is rehabilitation of orphaned spider monkeys with a "soft" release and reintroduction back into this part of Costa Rica, where capuchins and howlers are still present.  The monkeys are caged at our wildlife rehabilitation center, but taken into the jungle regularly (without leashes) to play and learn in the trees. 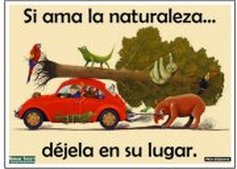 "If you love nature leave it there."
Zoo Ave, La Garita, Costa Rica
http://www.zooavecostarica.org/
http://www.facebook.com/?ref=tn_tnmn#!/zooave
Tel (506) 2433-8989
Since 1990, Zoo Ave ("ave" means bird in Spanish) has worked to preserve native flora and fauna through wildlife rehabilitation, captive breeding, release of native species and operation of a zoological garden. The Zoo is designed to educate the public about conservation and display native Costa Rican species in a healthy and respectful manner.

Zoo Ave has over 80 species of native avifauna on exhibit including 13 species of psittacines (parrots), 16 species of raptors (hawks, eagles and owls), 40 species of songbirds, 5 toucan species and 4 species of cracids (guans, currosaws and chachalacas).  A mural shows Costa Rica's 850 bird species painted to scale.
In addition to birds, the zoo houses reptiles and mammals.  Visitors will see a number of indigenous primates (squirrel monkeys, spider monkeys, howler monkeys, white-faced capuchins, and tufted-ear marmosets).
Zoo Ave is open to the public daily from 9:00 - 5:00.  $15 adults, $4 children. 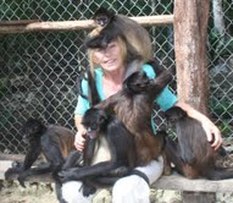 Heidi with some of the spider monkeys.
The Jungle Place, Quintana Roo, Mexico
http://www.thejungleplace.com/
http://www.facebook.com/pages/The-Jungle-Place-Spider-MonkeySanctuary/177172862314258
"A sanctuary for the endangered Spider Monkey.  We provide food, shelter, access to medical care and a lot of love to rescued Spider Monkeys who were victims of the illegal pet trade, poaching, and habitat destruction and have nowhere else to go.  We strive to provide these remarkable, highly intelligent primates with a safe and happy home here in their native jungle. They live and play as a colony/family and are provided with all the care they need to thrive, as they can no longer survive in the wild."
The Jungle Place allows visits two days a week, by appointment only.